I flew from NYC to Tampa on February 1st for a couple of days of test shooting. I met Mehdy for the first time ever and got to see my old friend Anthony for the first time in far too many months. We got to see the T-shirt’s Owen is making for us for the first time and had Mehdy’s friend Echo model them for us. We shot, edited and scored episode 1 just in time to leave Tampa. On Wednesday we flew from Tampa to Panama and uploaded the video from the Orlando airport while on layover. We got to the hostel Mamallena some time after 3am. We spent two nights at Mamallena and then moved to the Luna’s Castle Hostel the next day for 5 nights.

Mamallena is low-key hostel with great staff, $1 beers and a hammock in the rec room. A great place to relax; perfect for how we arrived. Luna’s Castle is a different animal. Built on 4 levels of a mansion it has dorms and private rooms on the top level, a kitchen and common rooms on the 3rd level, a screening room, art gallery and other private rooms (massages!) on the 2nd level and a courtyard and a great little bar called Relic on the bottom level. Relic was packed every night we were there with both locals and travelers.

I’m sitting here now trying to compile some of the moments that have resonated the most in the pasts week and, huge surprise, they revolve around music more often than not. 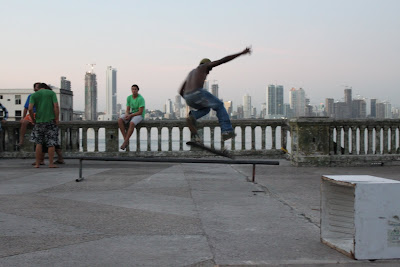 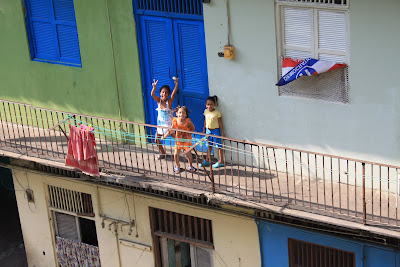 Some kids in the ghetto next to the hostel dancing to the band playing below and waving to me.
One night at the bar Relic in Luna’s Castle they had an artist painting live. I took some time lapse photos of this that may surface later. Another night the surfer Rob Machado was there to promote the release of a movie called The Drifter and the president of Panama (who has some sort of residence across the street) showed up to hang out in the corner and drink some scotch. There were men with ear pieces and guns everywhere. Interesting mix with all of the surfers who showed up. Not bad for a hostel bar eh? 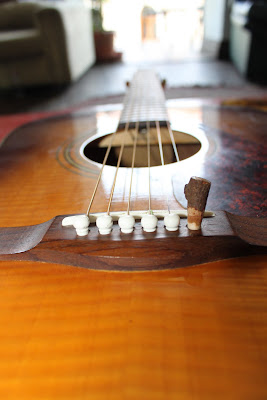 I ran to a local music shop and got new strings for one of the hostels guitars, but forget to get a replacement for the missing peg on the high E string. So I wittled one out of a stick.

After a bit of struggle and confusion as to what the vision for each video we were producing was we ended up putting out three from Panama City. One really focuses on Luna’s Castle, the next is a video diary of the cast/crew and the third lays out the decision that we are asking the audience to make to determine where we go to next. 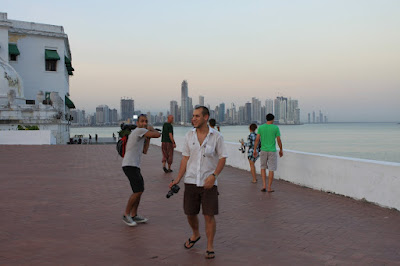 Tension mounts amongst the crew.
Share on TwitterShare on FacebookEmail This