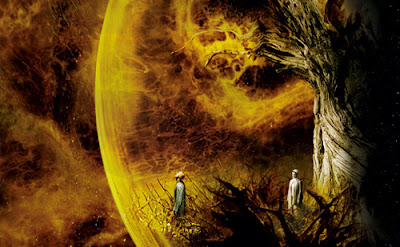 I finally watched ‘The Fountain’, a film by Darren Aronofsky. This is the guy who made Pi and Requiem for a Dream. And I have to admit, I was really blown away. Tony has been telling me for months to see this movie. He was right.

First of all yes, the movie is beautiful to look at. The acting is great. The special effects are exciting, yet somehow quieting. The editing is refined. It is a technically awesome movie. Having said that:

My initial reactions were purely emotional. I watched the movie, and was engrossed, but really didn’t know what exactly was going on. I could follow each scene, but an understanding of the story, the connections between the scenes, just wasn’t gelling. Normally, when offered an experience such as this, I feel frustrated or bored or detached from the characters and their plight. Yet, somehow, the exact opposite was happening as I watched this film. My heart was breaking, over and over. My investment in some sort of positive outcome only seemed to increase as my ideas about what that might mean dropped away one after the other.

I was left stunned, in awe and wonderment as the credits rolled.

Then, in the hours after the movie ended it was as if a dust storm had calmed and all of the pieces began to settle on the ground beneath me where I could look more closely at them and see patterns emerge in their arrangement on the ground. Suddenly a wave of ideas washed over me. Life and death merged. Chasing immortality became a fear of life. Love became a denial of that which he already have. Death creates life. One life is many lives. Dis-ease is the path to ease. And in these and so many more paradoxes a much greater, more inclusive truth was illuminated. In the recognition of the ultimate interdependence of relative reality the need to define by opposites became a beautiful tapestry which allowed all of our pain, suffering, joy and triumph to have meaning within the context of one another.

I gotta watch that shit again.