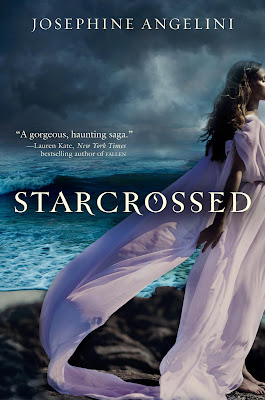 Disclaimer: I have known Josie for most of my life. She is a phenomenal human being in many ways. So I may be biased here. None the less, when any friend hands you something they have created, there is always excitement mixed with the fear that you will hate it. More often than not I am underwhelmed by my friends attempts at greatness. Aren’t we all? This is not the case with Starcrossed. I fucking loved it!

Starcrossed is exceptional. Recently published by Harper Teen it is the first book in a trilogy. It takes the Illiad, the epic Greek poem with Helen of Troy, the Trojan War, gods, demigods, love and destruction, and places it in a high school in modern day Nantucket. Josie described it to me as Romeo and Juliet meets the Iliad. There might be a touch of Twilight and Harry Potter in there as well.

It is an epic love story and a battle for the fate of humankind with the gods. It has super powers, timeless beauty; there is mystery and deceit both hidden and revealed around every corner. I started it on a flight and finished it the following day at 1:30am. I was totally hooked. My sister Aileen is mentioned (as a dead character). And I think one of the actual living characters takes a few notes from Aileen’s chutzpah.

The story of how the book got written is equally amazing. Check out this video piece that tells the tale. Basically, her amazing husband Leon demanded that Josie stop working for a year and finally write a book. Over the course of that year they went into credit card debt, but stayed true to the goal of Josie finishing her book. With the book complete they were now staring at real financial uncertainty. But! Within weeks of Josie finishing the book and getting it to an agent she had a seven figure publishing deal! Everyone who read Starcrossed loved it. It is already published and becoming a best seller in multiple countries.

Check out this video that tells the story:

I loved reading it. I can’t wait for part two of the trilogy to come out. And when do they start making the movies?!