The story of these two brothers is beautiful and inspiring.

What Caden does for Conner brought me to tears.

These little men are AMAZING!

Tears of Joy and Sorrow

My sister Aileen got married yesterday. At her wedding she had a photo booth. Together we made faces. 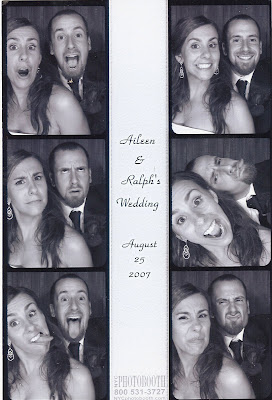 Reilly sent me an email on Aug 1st with a last minute plea for me to help out at Camp Bright Feathers (CBF) as a CIT (Counselor in Training) facilitator. Reilly has been volunteering at this camp for something like 13 years, but was in Poland at the time and could not attend. I have been feeling like my work lacks meaning, and looking for ways to contribute more, this presented a great opportunity. CBF is a week long camp in New Jersey for children ages 6-13 who are affected by HIV. Some campers have HIV, some have family who do, or have lost someone close to them to it.

So that is where I spent the past week. I was at CBF from August 18-August 25th. I stayed in a cabin with 15-16 year old boys in a village with another cabin of 15-16 year old girls; all CIT’s. They were former campers and new volunteers with ties to the camp.

We spent the week exploring what it means to be a role model for children and attempting to make sure that all of the campers had as much fun as possible despite the fact that it rained most of the time and almost all of the camps activities are usually outdoors. The camps intention is not to focus on HIV or sickness in any way. It actually provides the opposite for the kids. The camp tries to be one environment where this can fall back. Stopping for meds 2 or 3 times a day does not have to be explained, and when meeting new people the pressure of when to divulge certain information can be relaxed a bit.

Many campers seem perfectly healthy, a few have extensive scarring, some have cerebral palsy or some sort of developmental delay, most come from situations at home and in their community that I can only relate to through stories and imagination. The one thing that most all of them seem to have in common is an astounding degree of resilience and so many share a true passion for life. These are children who face hurdles at home and within their own bodies that I have never had to face. So many of the things that I have long taken for granted are a struggle or stretch that never reaches its goal. These are not Magic Johnson’s children. Most come from the inner city in places like Philadelphia, PA and Camden, NJ. The camp is free for them and the staff is comprised mostly of volunteers. I met a lot of great people, many of whom came to camp years ago and have not stopped coming back. I intend to do the same.

I had to leave camp a bit early on Friday to get back to Manhattan for my sisters rehearsal dinner, followed by drinks, then woke up on Saturday, quick workout, went to pick up flowers for the wedding, dropped some of them off for the bridal party, then went to meet up with the groomsmen. Donned a tux, did the pictures outside in the park thing in 90+ degree weather, and then headed over to the Foundry in a stretch taxi limousine.

The wedding ceremony was great. My sister looked amazing. I love to see her looking so beautiful and happy and surrounded by so many who love her. Ralph’s family is awesome. The room was full of friends and family, many of whom I had not seen in years. It was an intimate 110ish person affair. I can’t describe how blessed I feel to have this as my foundation. The amount of opportunity and support that I have in my life is staggering. It was the realization of this that overwhelmed me.

I am the type of person who usually takes a great deal of alone time. I meditate, read, exercise, play music, sit and pick my nose, whatever. I had spent the entire week in a cabin in the woods with a campers and fellow counselors. In rushing home and jumping into the dinner, wedding, family, friends scene I never really allowed myself any time to process the week or transition back into the day to day city life. I thoroughly enjoyed myself and those around me for most of the night, but towards the end of the night I began to reach a point of overwhelm.

I went upstairs to the balcony overlooking the dance floor with a glass of water to catch my breath and take it all in. Sitting there by myself was the when the week finally caught up with me. Reilly had warned me that it would probably happen at some time during the week, perhaps after taking the campers to the infirmary for meds. The week at camp had been wonderful. I was surrounded by so much strength and resilience in the face of so many hardships that I could not imagine feeling down. I jumped into the camp life fully, resisting nothing, and trying to keep my heart as open as possible at all times. I practiced Tonglen while walking throughout the camp and was honored to have the opportunity to be invited into both the simple and difficult experiences of these strangers lives. It was only here, in the extravagance and familiarity of my own life, that the weight of it all could be felt.

Amy walked by and said “come downstairs and dance, it’s your sisters wedding”, but I had been choking back tears already and felt a bit guilty about bringing my overwhelm into the room. I declined, waited a moment, and then walked downstairs and out the front door into the streets of Long Island City. I made it half a block before the tears came, overcome with tears of joy and sorrow, I walked quite a few more before sitting down to catch my breath and let them stop.

I do not have the words for the weight that the past weak has held. I am so happy for the life that I have been given, and so grateful to be able to share my abundance with others. I am amazed at the energy and compassion that children who have know so much suffering can show towards one another. I am in awe of all of those who consistently give of themselves when faced with the lack of others. It seems as if facing difficulty in life has allowed many to truly care about others and recognize our interconnectivity far more than a life of carefree pleasure ever could have. I am continually thankful for the family and friends that life has presented me and recognize that the suffering that I have faced in life has helped make me who I am and added to my desire to reach out to others stumbling along their path. The opportunity to give is truly that, an opportunity. I hold no delusions of being anyones savior. I am simply honored to hold another’s hand as they take a few steps forward. It’s a shame that it’s taken me so long too figure out the gift that service can be to both myself and others.

Introduction to the blogging

Yesterday I had my interview with Big Brother Big Sister of Queens. I am thinking that this will be the main focus of my blog. I have training on July 7th and they should assign me a Little (what they call the little tyke I”ll be teamed with) by August. From this point I am committing 4 hours every 2 weeks for 1 year to this person. He will be a he and he will most likely be between the ages of 8 and 14. After my interview I was told that I will probably be teamed up with a young teenager.

I initially thought that I would like as young a child as possible, but I am now thinking that this was for mostly selfish reasons and that I probably have more to offer an older kid.

The other reason I chose to call this Big Brother is because I work in security installing cameras and access control and the implications of this are obvious. I usually refer to us as Little Brother because we work for private companies, but we’re watching you regardless.

This is a picture of me with avocado on my face: 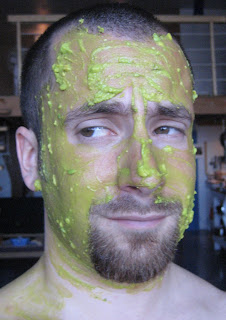