This should be the most boring post of this group. I have far too much to write about this trip to do it in one post. So I am going to break it up into 6 as follows (click on the links to jump around):

Analysis and other Crap

I met Walker at Amy and Eric’s wedding in Kill Devil Hills, North Carolina. They rented two large houses on the beach for a week and invited friends and family to come when they could; family in one house and friends in the other. Walker and I spent a lot of time talking raw food, consciousness and generally geeking out. A month or two later we were talking online like a couple of little school girls getting all excited about common interests and he suggested a trip to the Amazon to do ayahuasca. I, of course, agreed on the spot saying something to the effect of ‘let’s not talk about it, let’s just do it.’ Another month passed before Walker forwarded me an email from a friend recommending ayahuasca-healing.net as a resource. I agreed immediately that this was the place and decided to buy a ticket. We originally envisioned traveling to the jungle and then trying to find a shaman and convincing him/her to let us partake in a ceremony. The journey would have been the trip. Finding lodging, food, dealing with bugs, trying not to get killed etc would have required a lot of energy. At this place, which is run by a clinical psychologist named Silvia Polivoy, we would have cabins, bug nets, and a whole lot of locally grown organic food to eat. I was sold almost instantly.

I also assumed that we wouldn’t be dealing as much with the magical worldview of some primitive culture. This is important to me when it comes to the environment in which I will be unpacking and processing my experiences. We would instead be in a therapeutic setting with all activities being conducted in English. Big plus.

Arranging flights was eventful. Travelocity and TAM airlines make for a minimally communicative experience. I had to push pretty hard to get flights rearranged at one point when one of the legs of the flight that I was sold ceased to exist (but continued to be sold). It also became apparent early on that Walker was not going to have the monetary funds to make the journey. No problem, I’d go it alone.

I spent weeks before leaving preparing for this experience. I made a conscious decision to make this as transformative an experience as possible. I decided to be as vulnerable and to offer as much of myself to the experience as I could. In the spirit of this I did a lot of writing and worked with my ILP partner Amy with what I was coming up with. Without boring you with too many of the details I came up with six topics of exploration.

Career – How can I best use my gifts to serve the Kosmos – what is my purpose in life.

Six-Pack – I will be in the best shape of my life this year and the next.

Enlighten-up – Get enlightened and cultivate non-dual walking awareness and action.

Cognitive – What should I study? Do I need a teacher? School?

Armed with a decent amount of writing on each of these topics and ridiculous amounts of thought, much of it directed towards cultivating the most fulfilling career path possible (while struggling to engage my current career). I proceeded to get sick a couple of days before leaving.

Arrived at JFK at 6ish on Monday for a 7:40pm flight. I will be arriving in Bahia at 2:30am on Wednesday. It is currently 1:30pm on Tuesday and I have barely slept. I spent the majority of the 10 hour plane ride from NYC to San Paolo being kicked by a screaming, sleeping, 3 year old. I was kinda impressed too. We spent the first half of the flight as play buddies. I would try to read and she would unhinge my tray so it fell in my lap. We laughed for hours. Then it was time to sleep and someone was not having an easy time of it. She was in between me and her mother. She would lay her head in her mothers lap and her feet were by my side. Every once in a while for a few minutes at a time she would start thrashing, kicking her legs violently into my side, screaming and crying, all while still half asleep. That was fun.

When I got to San Paolo I had to get my luggage and then catch a shuttle bus to the other San Paolo airport. This was an hour and a half ride through traffic. I nodded off for a couple of minutes and woke up sweaty and confused. When we got to the airport I grabbed my bags, walked to the gate and was told that my plane was leaving in ten minutes and that I was too late. They sent me to another counter. These nice people told me that I could catch the same flight the next day. I said no, today. So they told me that I could catch a flight that leaves in about 10 hours…..at the airport I just came from. OK. It’ll cost you $100 dollars to change the ticket. NO, you booked this flight and told me I would have plenty of time to make the connection, this is your fault, you pay. OK. What they didn’t tell me was that I was actually going to have two flights. Instead of one 2 hour flight I am now waiting 10 hours to take 1 two hour flight and one 1 hour flight. I will arrive at Ilheus airport at 1am and then take a one hour taxi ride to the place I will be staying at. That fucking rocks.

I’m actually having a good time in the airport. I’ve met this dude named Kerem from Baltimore who is currently living on a little island off the coast of Brazil doing web design and producing music. Brazilian women seem to like us. I fucking suck at dialing international numbers. There are country codes, which aren’t needed when you are in the country, but are given to me as part of the number based on the assumption that I’m not ignorant. I am. There is also a 3 digit service provider number that must be dialed from the payphones in the airport that lets you choose your carrier. This is written clearly on the phone in Portuguese, which I don’t understand.

All in all I will have spent 32 hours traveling, assuming the rest of the trip goes as planned. This is slightly more than the 19 hours I expected based on my itinerary. Se la vi. 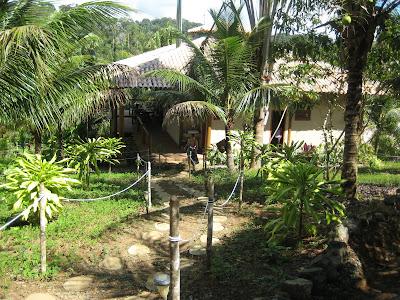