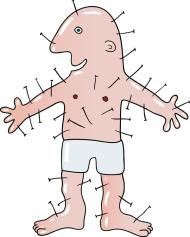 I just just got my first ever acupunture treatment from an old friend. Steve Kingsbury was my next door neighbor growing up. I’ve been friends with his son Brian since a few days after he was born (I was one at the time). Recently Brian was in NYC with his new band The Susan Constant playing a show at Arlene’s Grocery. Great show. I recorded an album for Simple Discourse, the band that The Susan Constant grew out of, and Brian and I were in a band together in high school with Jason Rossman, the drummer for both bands . Over a beer before their set we talked about his fathers new business. Steve retired as a Bose exec and went back to school for accupuncture. He has sinced opened up his own practice, Ashland Community Acupuncture, right in downtown Ashland, MA.

I know a number of people who have gotten great results from acupuncture treatments. I have always been interested, but had never really had a reason to lay out $100+ other than curiosity. Here’s where the community acupuncture model steps in. From Steve’s site:

In our community acupuncture clinic the treatment room has four recliners arranged in a quiet, soothing space. Receiving treatment in a community setting has many benefits: it’s easy for friends and family to come in for treatment together; many patients find it comforting; and a collective energy becomes established which actually makes individual treatments more powerful.

The real breakthrough in my mind is the sliding scale pricing:

Our fees are based on a sliding scale where you chose what to pay, anywhere from $15 to $35 per treatment. Research in the United States has shown that acupuncture is most effective when done frequently and regularly. Once a week is usually the minimum required to make progress, and twice weekly early in the treatment process can increase the success rate significantly. The goal of the sliding scale is to keep acupuncture affordable and allow you to come in often enough to get better and stay better.

And it works. I know because I went back a few days later for another treatment. And the second treatment in any week is only $10! This, to me, is the sign of a healer who truly wants to help people. Many acupunturists are hugely succesful treating far less patients for far more money. But here is a model which is designed to facilitate the individuals healing process.

One difference that I am aware of in this type of treatment is that you will largely be treated using the distal points as opposed to the local points. This means that most needles will be placed on your legs below your knees and on your arms below your elbows. These will address the flow of energy through the same meridians that would otherwise be treated, just not necessarily directly at the site of concern.

If you want to find a community acupuncture clinic near you: pocacoop.com/clinics/