The Big Three – The Good, The True, and The Beautiful

One key aspect of Integral Theory is the 4 quadrants (shown below), often referred to as I, We, It and It’s. These are four perspectives through which we can view the world. The idea is that all things arise in all 4 quadrants. The Upper Left (UL) quadrant is the interior of the individual the Lower Right is the exterior of the collective etc. 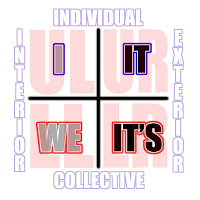 These 4 quadrants are often simplified into the Big 3 and correlate rather nicely with the tried and true philosophical ideas of the Good (we), the True (it), and the Beautiful (I). As it is only through each of these perspectives that we can know what is good (ethics, intersubjective), true (science, objective), and beautiful (art, subjective), it is important to remember that far too often we each tend to favor one perspective over the others and much suffering ensues.

Our assignment was to describe a memorable event in our lives using the language of each of these three major perspectives. Someone wrote about the birth of their child, and someone else lamented that they could not write about their own birth….so:

I opened my eyes and there they were, presumably the people who had been poking me and playing that awful music right in my ear every night. I know who she his, she feels like me. I think that we are the same. But these other men I’m not so sure about. One of them seems almost familiar, and now he his looking at me. He loves me. He is crying. Where the hell am I? It’s cold, I think someone just smacked my bottom, and suddenly the liquid that I’m breathing feels very thin and harsh. I’ve been screaming to go back, but no one seems to understand. They are passing me to her, laying me upon her chest. Here I feel at home again.

We knew that this was the most important day that we had experienced together as soon as the first contraction happened. There was a moan, the walls drew in, and suddenly we felt a rush of energy and anxiety course through our veins. Someone grabbed one of our hands and said that we needed to head to the hospital right away. We didn’t think that there was much too worry about, but we didn’t really have the energy to argue with him either. He is a sincere and caring man, and though he was not experiencing things quite as viscerally as we were, we knew that he shared our joy and concern for the import of this moment, and so we allowed him to lead us all to the car and drive straight away to the hospital.

It came out with a slurping sound and started wailing right away. It seems to have become proficient in the use of its levator palpebrae superioris muscles prior to seeing the light because it is blinking quite profusely. There seems to be blood and a number of other fluids coating the skin and what little hair covers its head as if the creature had just immerged victorious from battle or some other violent encounter. The umbilical chord was snipped like a piece of sausage and the placenta was bagged and rushed off to storage. The babies toes were counted, it’s face wiped off and it was placed gently on its mothers chest where the screams finally stopped and its heart rate slowed to a more restful pace.

It was interesting to talk from the we space of the mother-child union that is really a blurred line between self and other to begin with. Presumably the moments surrounding birth are when such a line is being drawn the most and yet also the most difficult to distinguish. The IT language felt cold and inappropriate for such an event, but no doubt was the most important for the overall health and well being of all involved. I don’t actually remember being born, so you’ll have to forgive my imagination creeping into the assignment, but from a completely subjective point of view who is to say that what I have described here is not a direct result of some sort of memory, or physical imprint from the actual birthing experience? Certainly not me.

Since part of me reason for taking courses in Integral Theory is to be accepted into the cult and thus help spread the good word I am going to try sharing my responses to assignments on this here blog. I know that some of you are wondering what the hell I have gotten myself into while others have an inkling and are curious to know more. Some already know quite a bit and perhaps as this progresses you shall learn even more with me. Please feel free to question and criticize at al times.

We have short weekly assignments in the form of written responses to readings that we are doing during the week. We post these responses in our ‘classroom’ which is actually an online forum where we are also required to comment on one another’s responses. Already, simply pondering the possibility of this I feel more engaged with my classmates than I often did in the regular brick and mortar atmosphere of undergraduate work where I rarely knew what others work consisted of, never mind engaged it actively. This could be fun.

Lesson #1 is a practice lesson based on about 75 pages of introductory reading on Integral Theory.

In my attempts to help consciousness blossom in myself, and all of those I come in contact with, few things seem to allow room for as much hope as the integral model. By using five elements of the AQAL model (quadrants, levels, lines, states and types) I am able to approach and understand the intricacies of interaction that play out within, between and around us in ever more subtle and effective ways. With the Integral Operating system as a tool walls come down, bridges are built, and new tools emerge from the synthesis of once disparate fields.

When working with children simply recognizing the need for a young, preconventional child to learn what is expected of them in society and reach a conventional level of development can be enlightening for someone who tends towards postconventional thoughts and wishes to foster the same in said child. Understanding that stages or levels unfold sequentially and can not be skipped allows us to appreciate the steps along the way and nurture them as healthy and natural rather than scolding them as less than ideal.

It can also be eye opening to recognize the lines of development that individuals exceed in or struggle with. Having this ability allows one the ability to appreciate one child’s cognitive skills, while recognizing that she may need your help when dealing with the other children emotionally. At the same time another child may be the perfect, emotionally outreaching playmate for her, but be lacking in his kinesthetic or physical sense of self and need encouragement or shelter from those more physically able or aggressive. 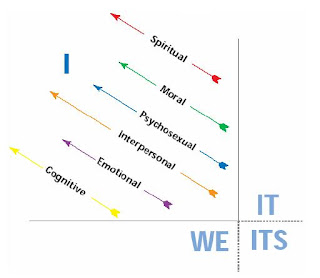